When planning such a large DIY you have to be ready to pull up your sleeves and do the dirty work. You also have to know when to call defeat. In the beginning of this backyard journey (when we decided we were going to take this project on ourselves) “J” & I tossed around idea of pouring, setting and stamping the concrete ourselves… true DIY style! 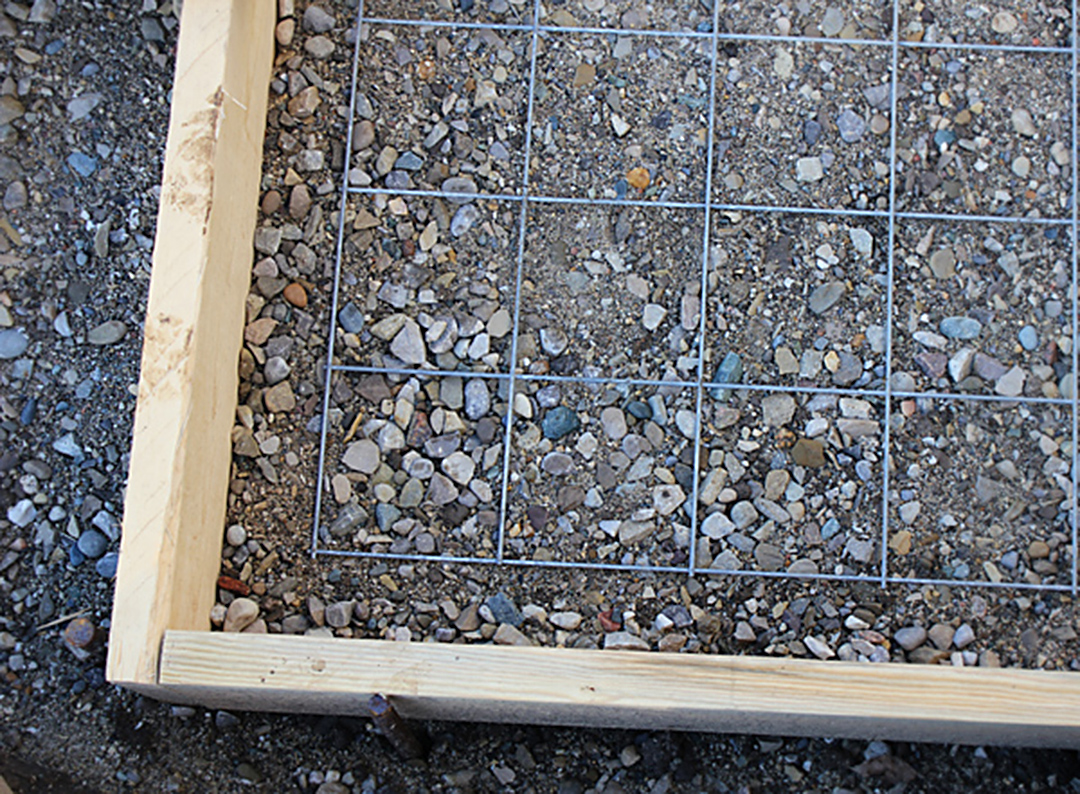 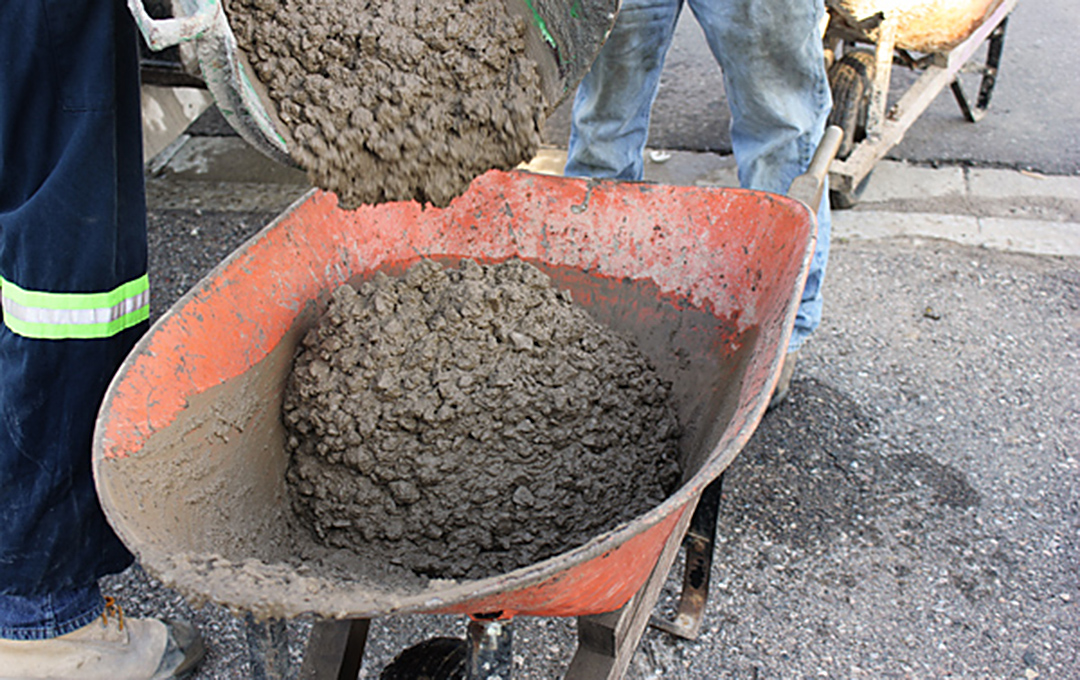 Turns out there were a lot of barriers that would prevent us from doing that. We initially thought about purchasing the (very expensive) stamps ourselves, but then decided against it. We asked friends and family if they knew a concrete company who would rent us stamps, no one took. Turns out, getting your hands on concrete stamps (without hiring a concrete company) is harder  than it sounds. 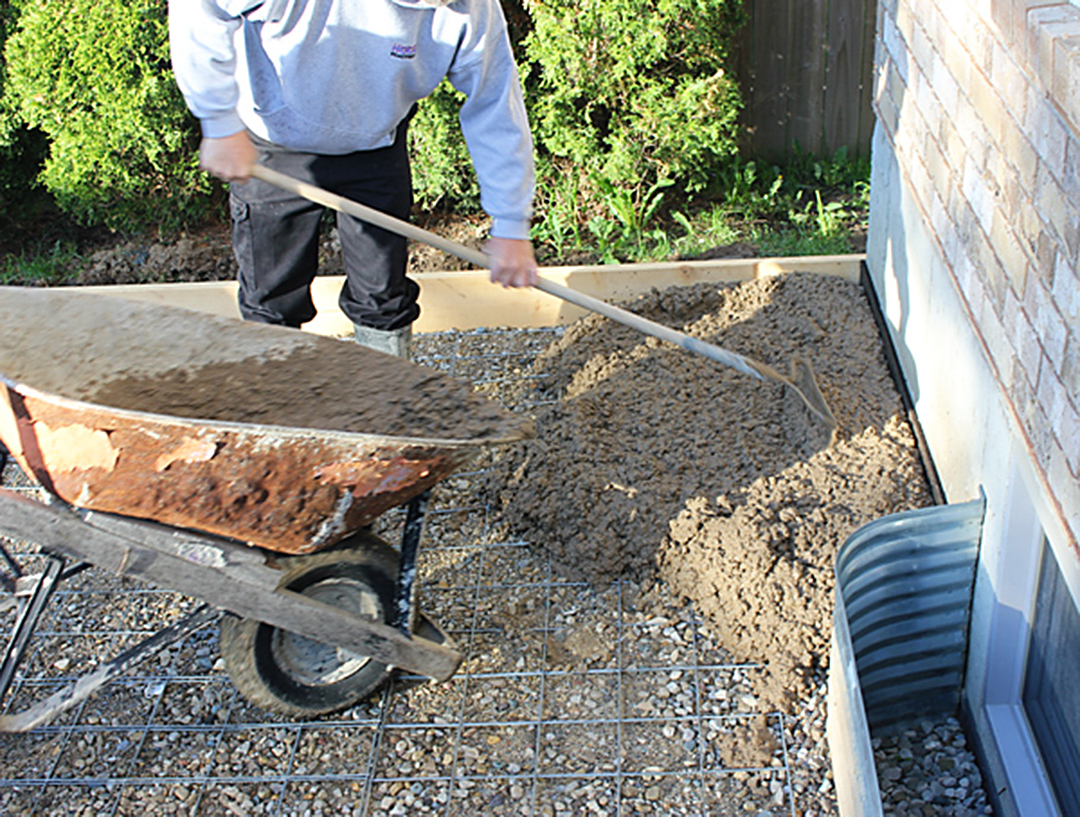 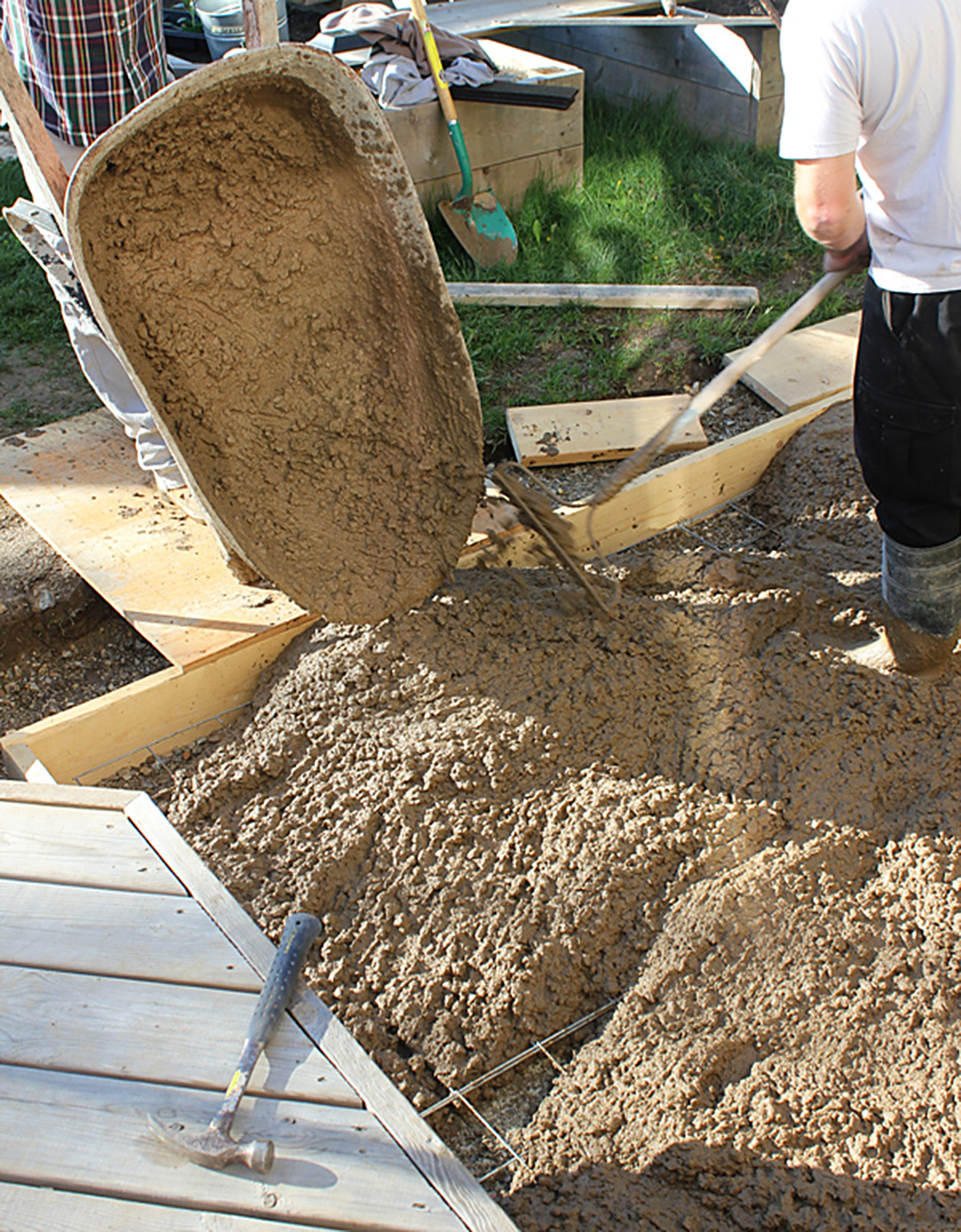 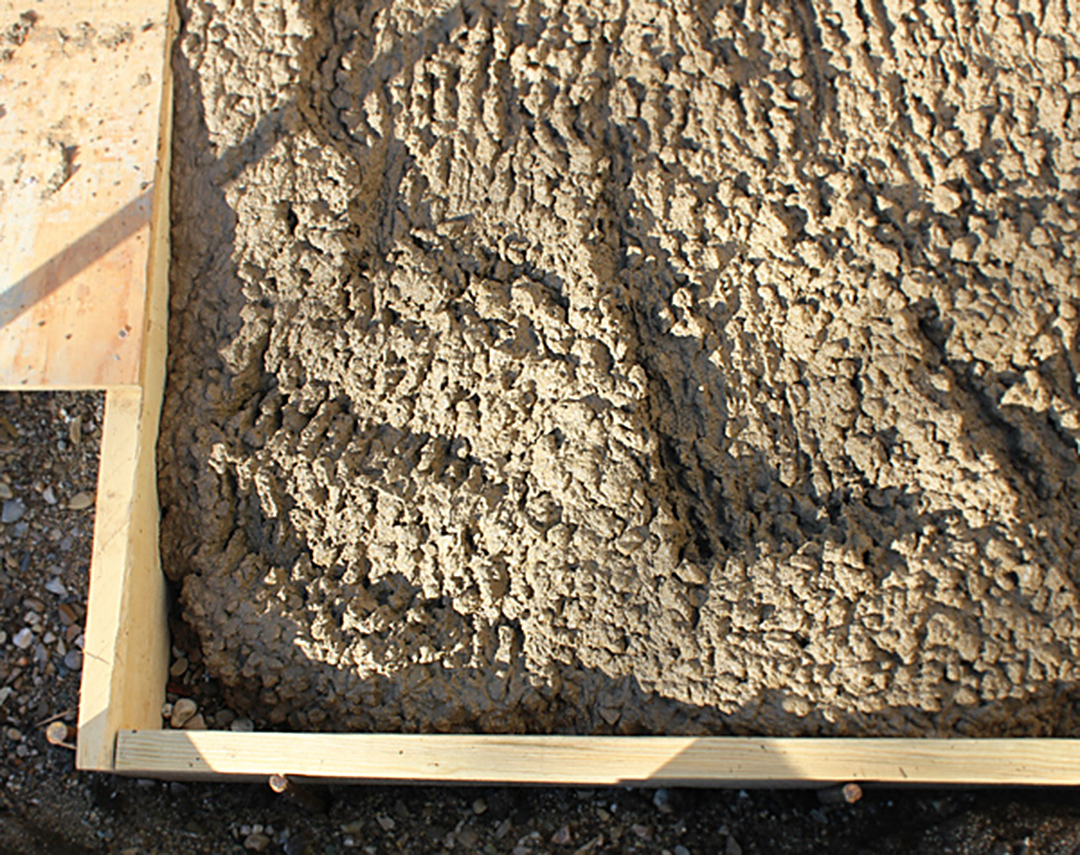 The longer we thought about it, the more hesitant we got. As confident as we are when it comes to other DIY projects, pouring and stamping the concrete was not something we wanted to gamble with. I mean, I did not want to be chiseling out a botched concrete pad. We knew we needed help, but didn’t want to hire a company to do it ALL for us. 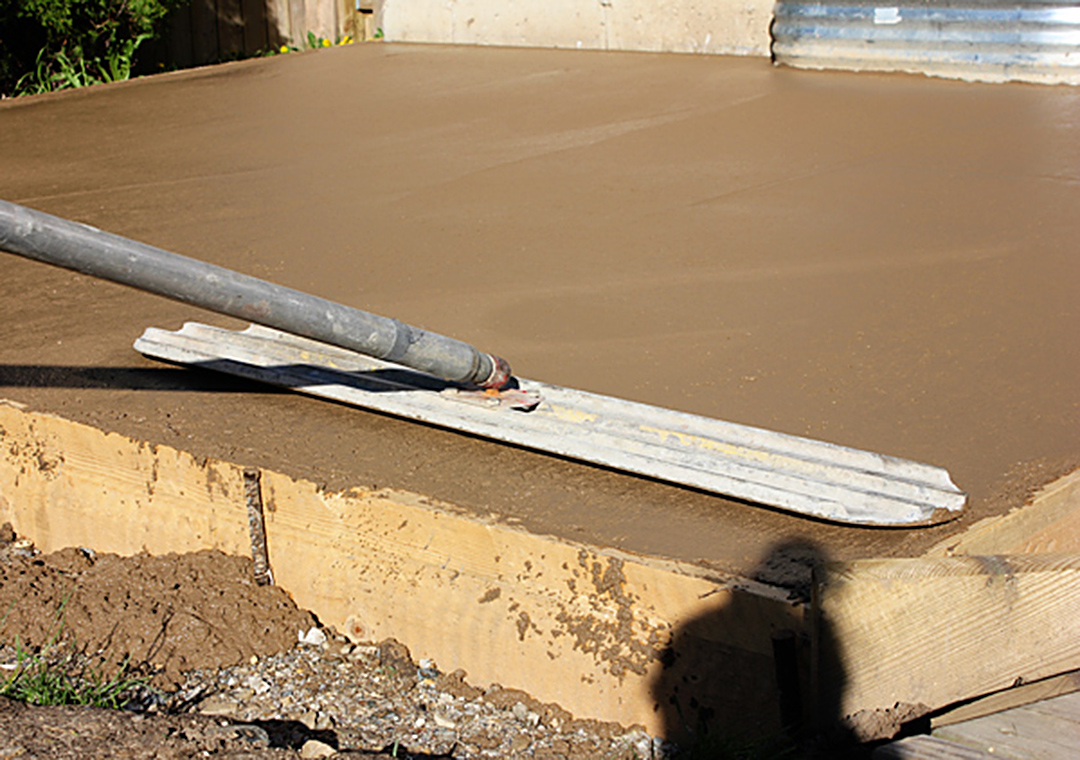 After weeks of searching, calling, and looking around we found our “guy.” Not only was he going to stamp the concrete for us, he was going to help us with the pour and set. It’s important to note this type of arrangement is not typical. Concrete guys don’t normally like finishing projects they didn’t start, and rightly so, if the form is not built right and the a-gravel work is shoddy the concrete guy is always the first to blame when the pad cracks. But after a quick site visit, he deemed our work worthy enough to allow him to pour, set and stamp. The big was problem was… his schedule. He was booked solid every weekend until September. Every weekend! The ONLY day he had available was May 24th. 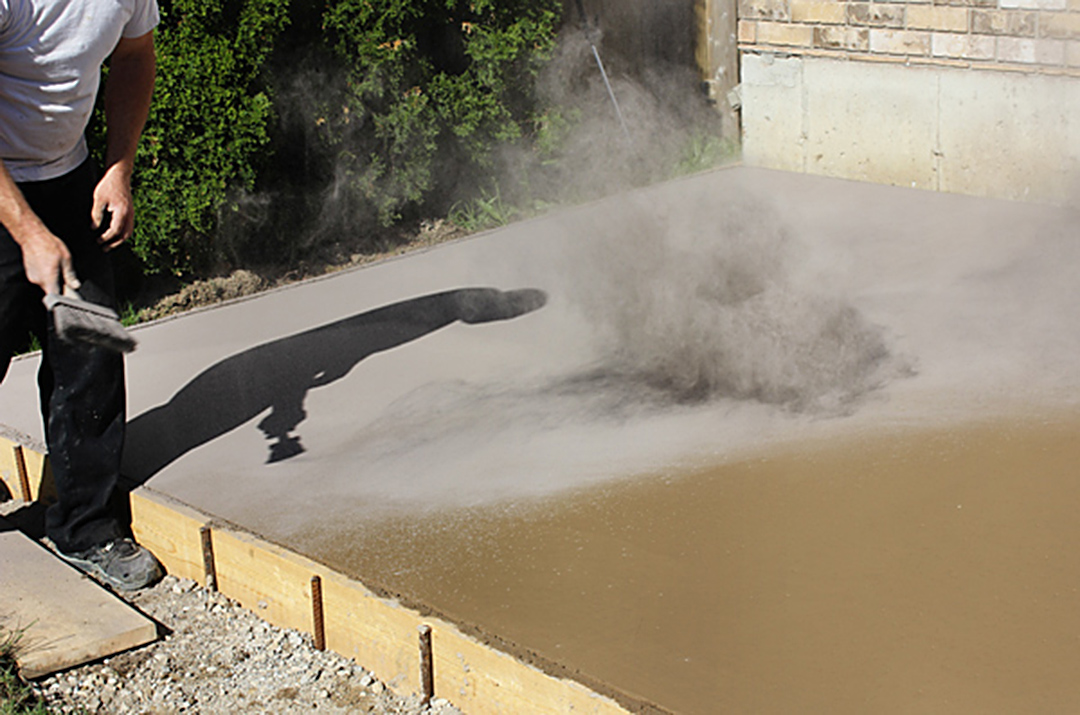 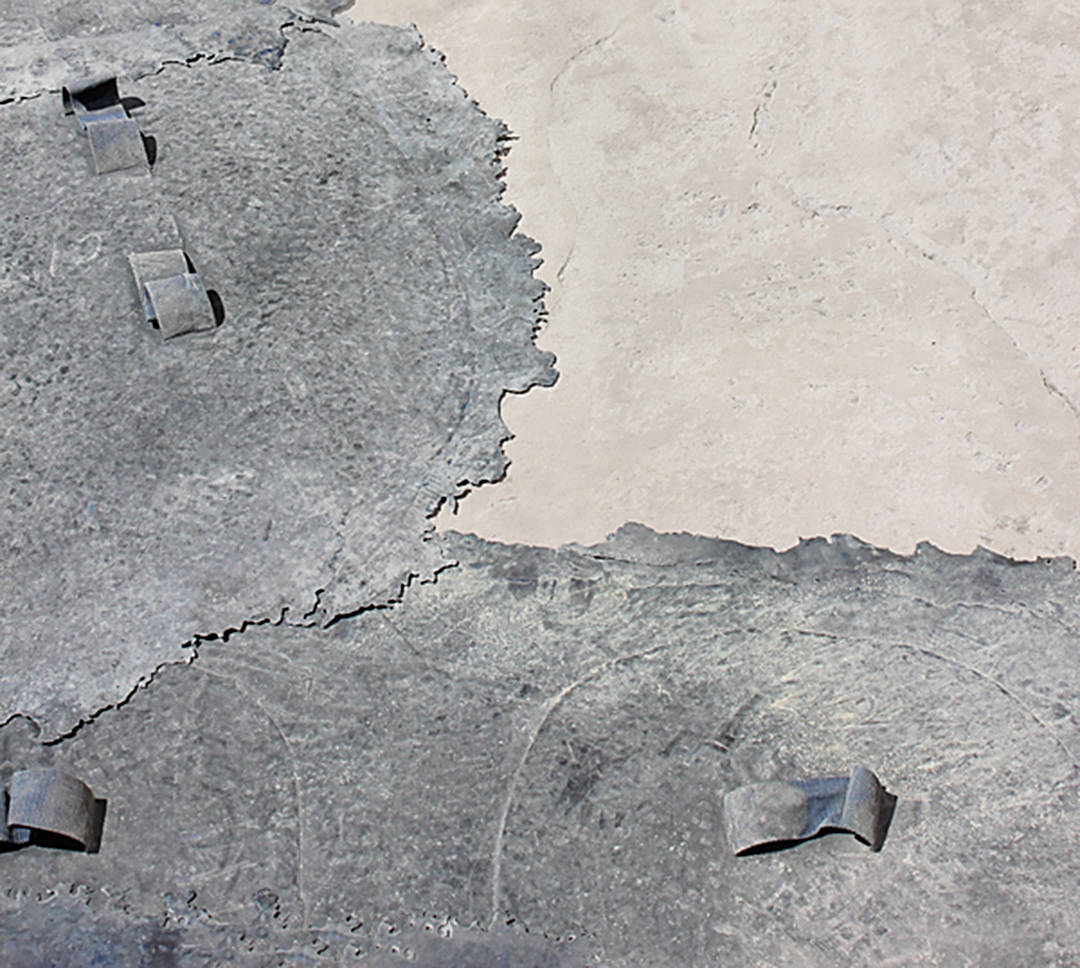 We were really taking a chance. With the concrete ordered and on the way, we had every single finger and toe crossed for good weather. 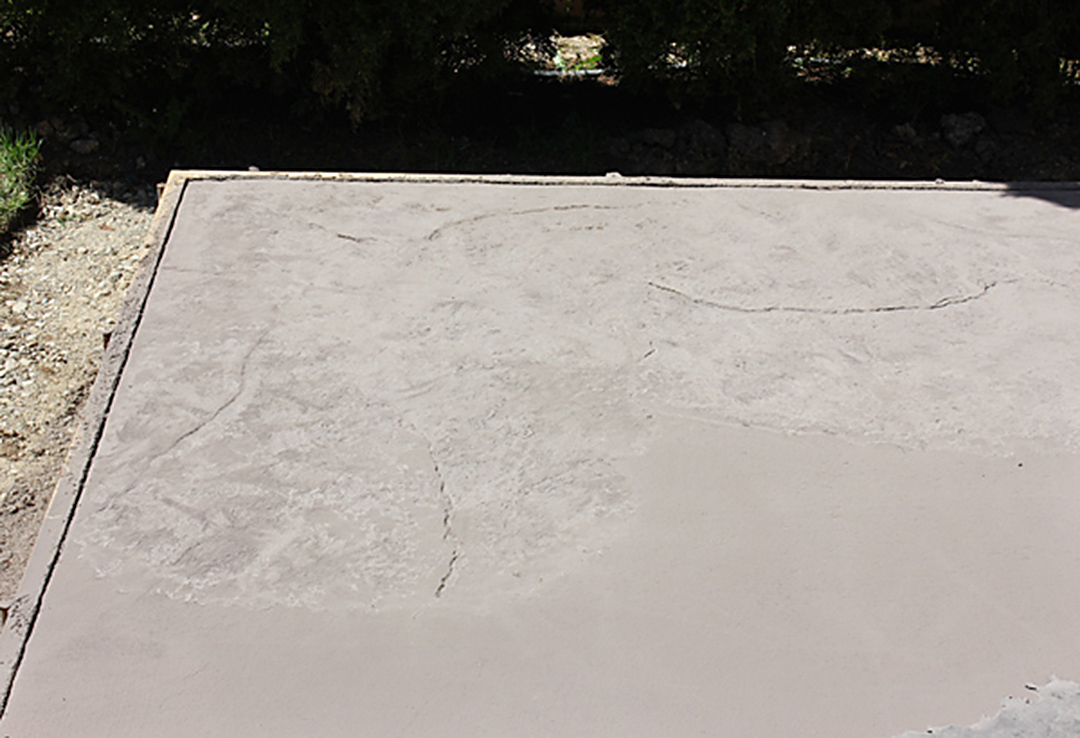 Bright and early on Saturday May 24th we were greeted by sunshine and 3.5 cubic meters of coloured concrete. Wheelbarrow trip after wheelbarrow trip, the forms slowly started to fill. Our “guy” worked his magic; raking it into the corners, getting all the air pockets out, and ensuring the rebar set in the middle. Literally 18,480 lbs of concrete later, both forms were filled. 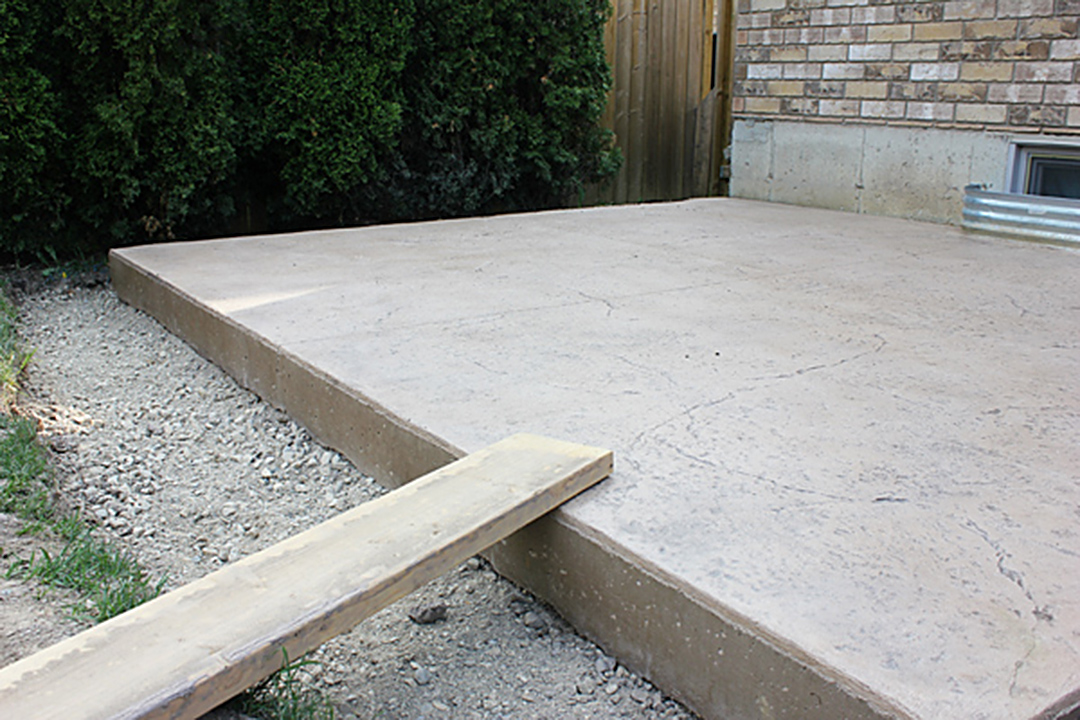 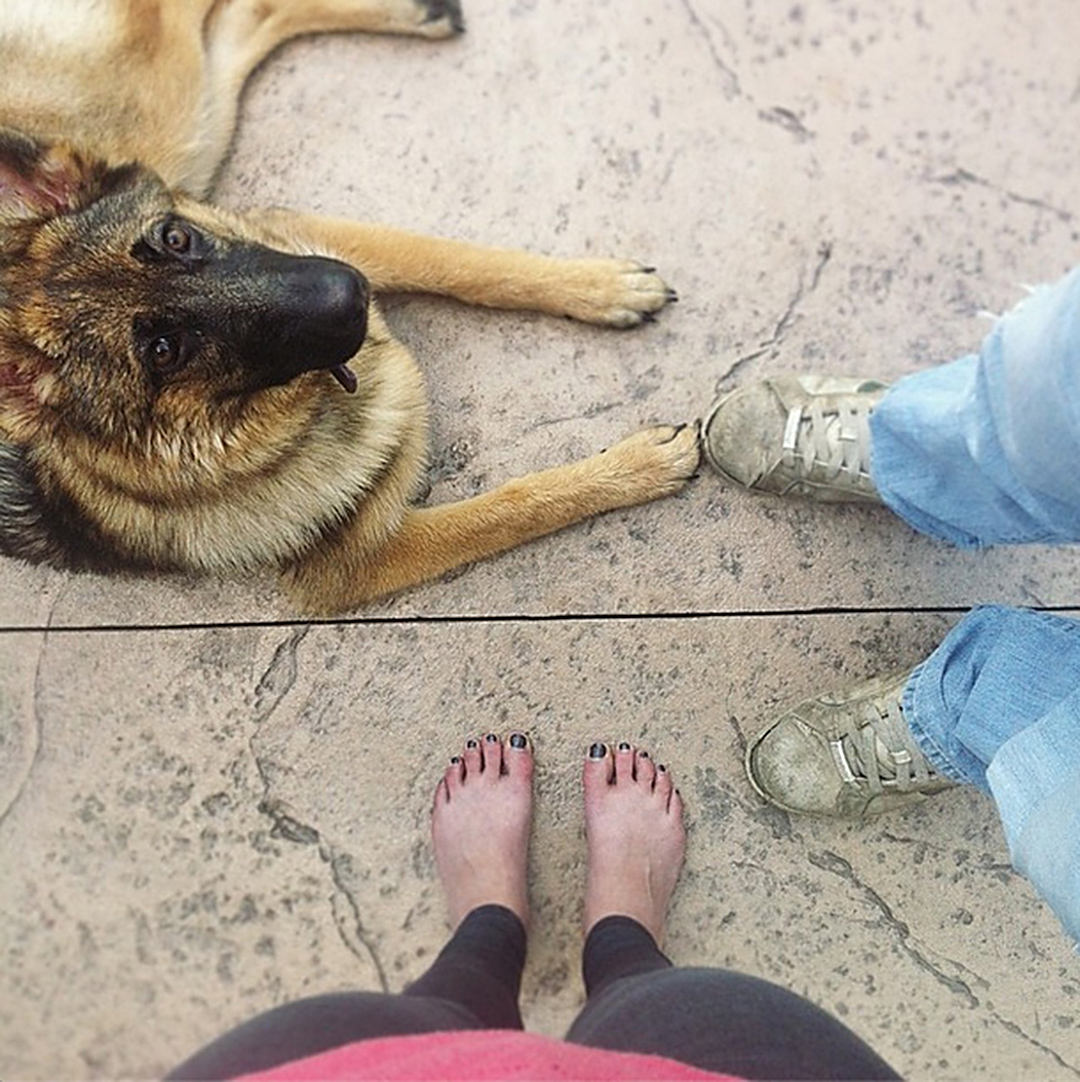 The sun and the nice weather worked to our advantage speeding up the setting process. After an hour or so the concrete was ready to be stamped. A contrasting release powder was sprinkled onto the concrete and big, rubber patterned stamps were laid on top… It’s actually a pretty cool process! And before we knew it, Saturday’s 5 hour project was complete. 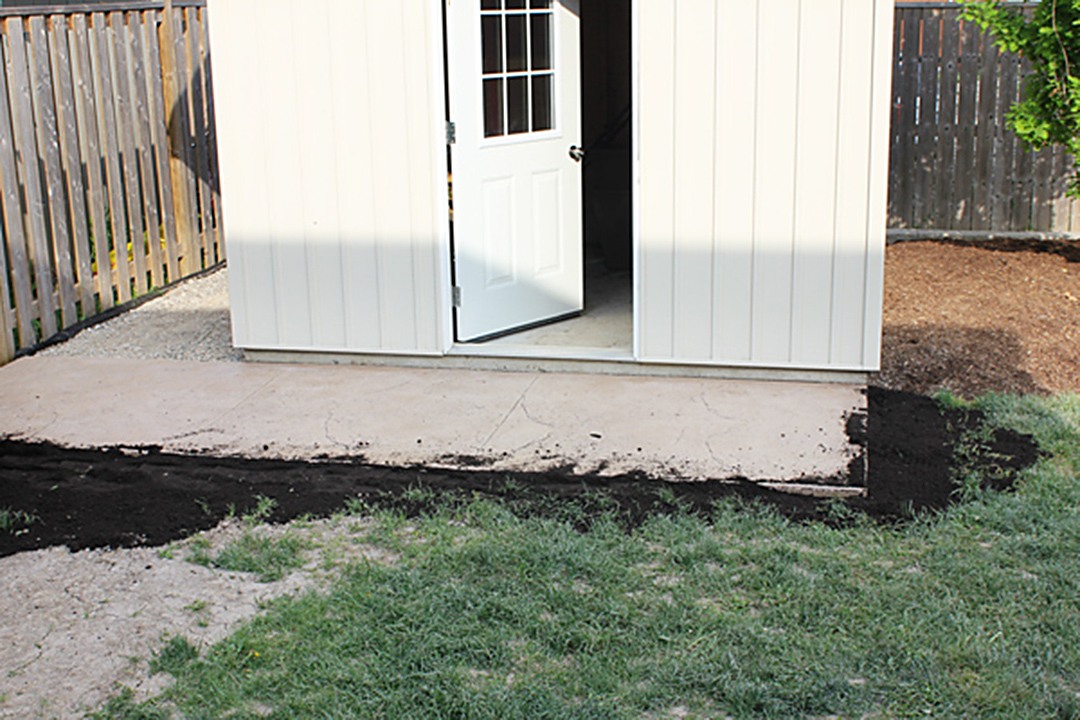 Following the major labour, the removal of the form boards and the hauling of the top soil seemed like a walk in the park! And now the hardest part… waiting for the grass to grow! 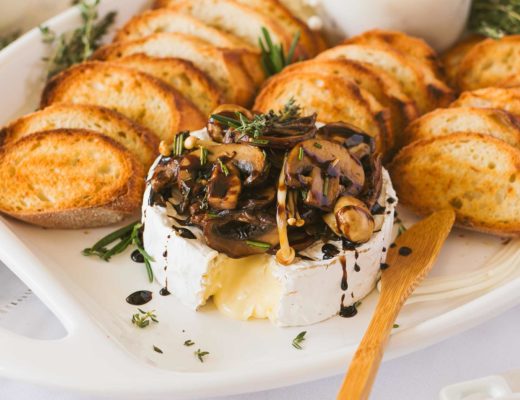 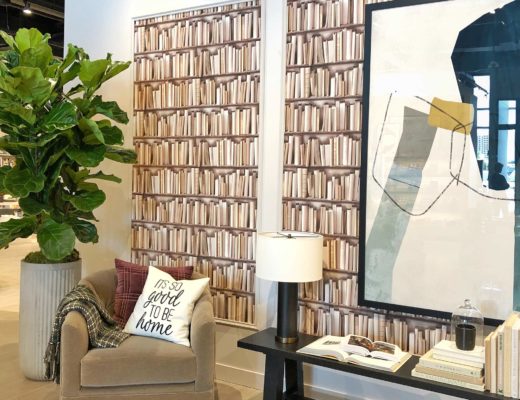 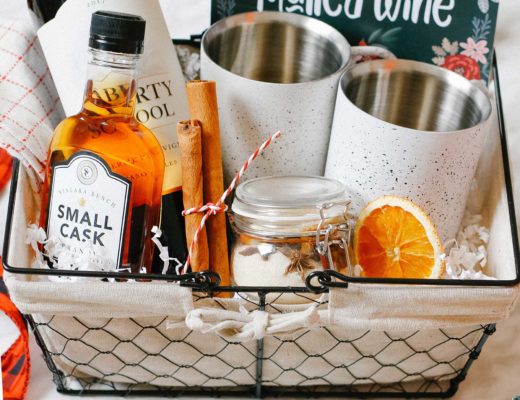 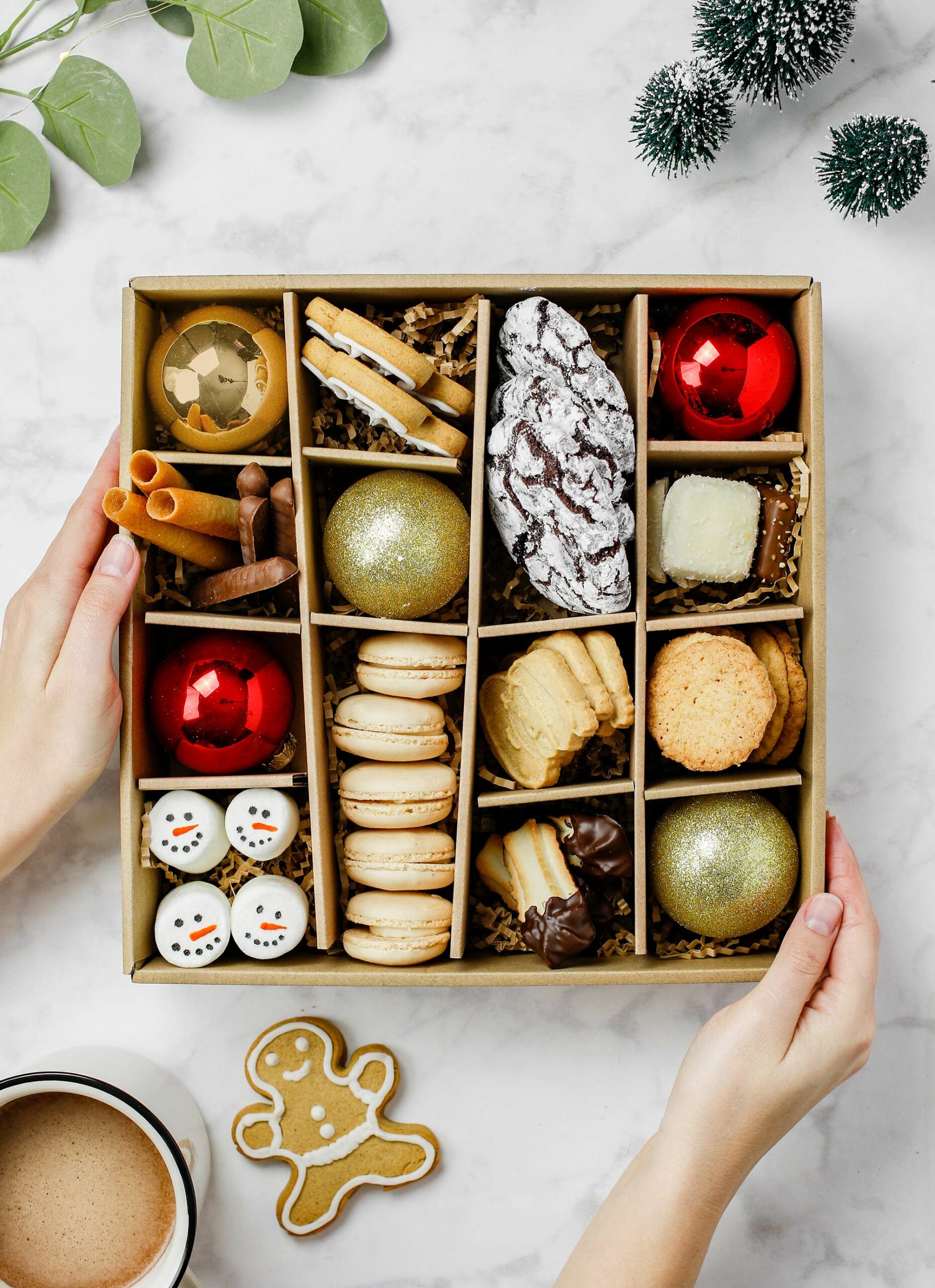 Before and After: A Modern Farmhouse Powder Room Reveal