I’ve been dreaming up this skillet cake for quite some time now. First I considered apples. Then raspberries, and then strawberries. But when I saw the first batch of Ontario blueberries at the St. Jacobs Farmer’s market last weekend, I knew they were destined for this cake. 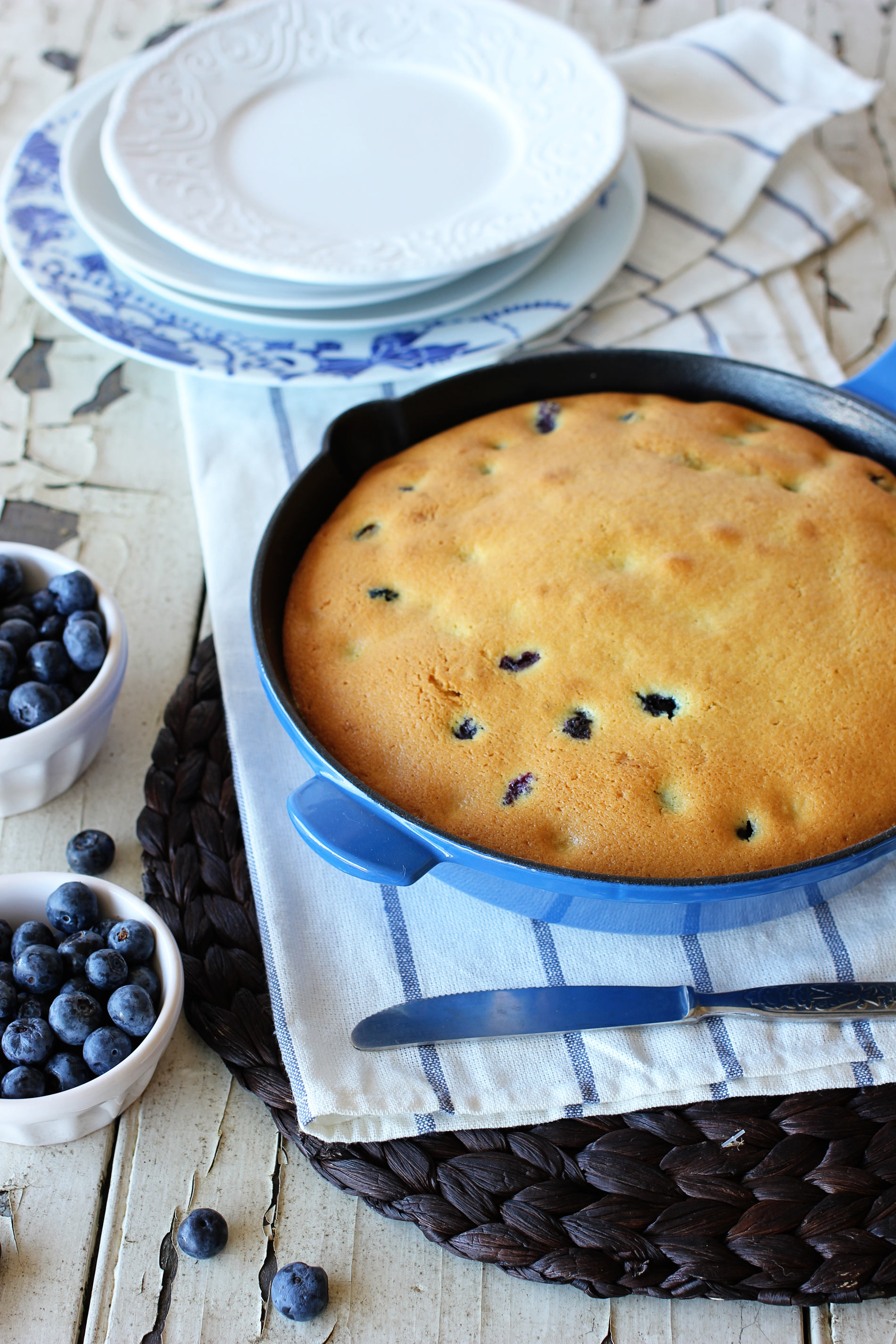 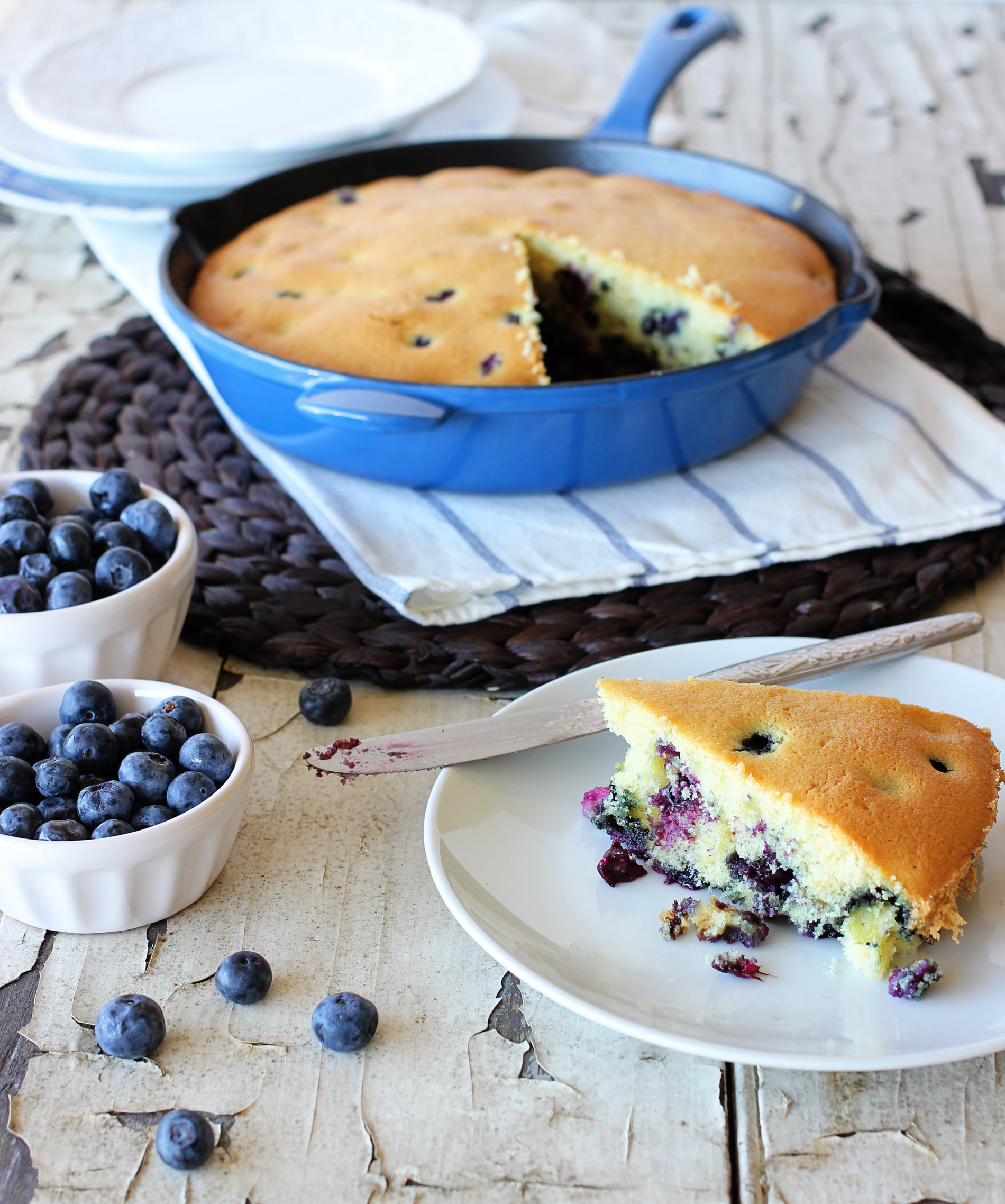 The texture of this cake is phenomenal. The light and fluffy cake is slightly crisp on the bottom and dotted full of colourful, sweet blueberries. I highly suggest enjoying at least one slice of this cake when it’s fresh out of the oven; the warm blueberries burst with flavour against the moist cake. So good! 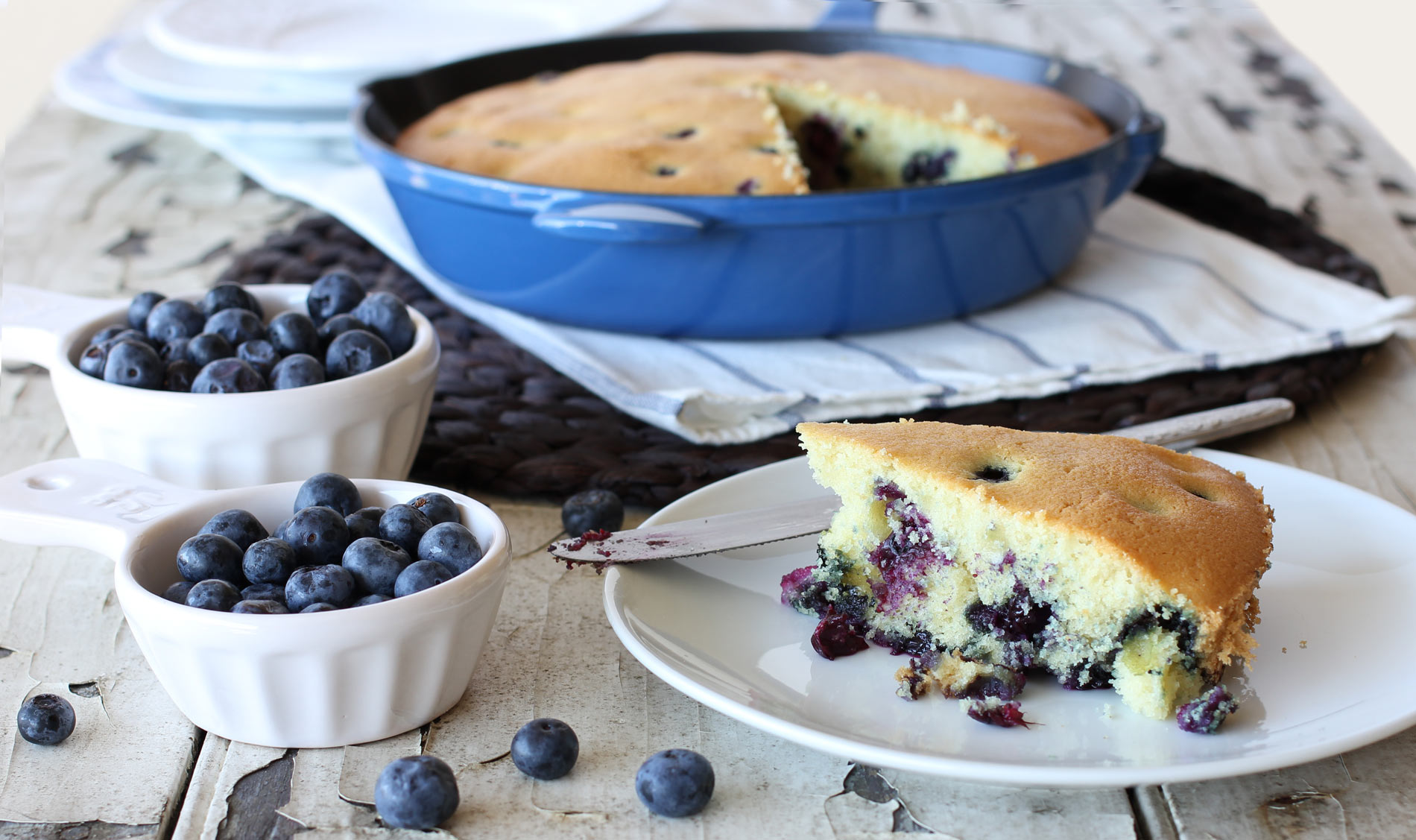 This skillet cake comes together quickly with several pantry staples. Blueberries are the name of the game in this particular recipe, however any fruit, such as raspberries, blackberries or strawberries can be used. Heating the pan beforehand and melting some butter will yield a nice crisp bottom on your cake – I highly suggest trying it!

Instructions
1. Preheat oven (with cast iron skillet inside) to 350.
2. In a large bowl, beat eggs until frothy, then whisk in melted butter, sugar, and almond milk.
3. In a separate bowl mix together flour, baking powder, baking soda, and salt.
4. Slowly whisk flour mixture into egg mixture, just until combined.
5. Gently fold in blueberries; until all berries are coated.
6. Remove hot skillet from oven. Melt a tiny pat of butter in bottom of skillet. Pour batter in to skillet and spread until it’s even.
7. Bake 45-50 minutes, or until top of cake is golden brown and toothpick inserted in center comes out clean. 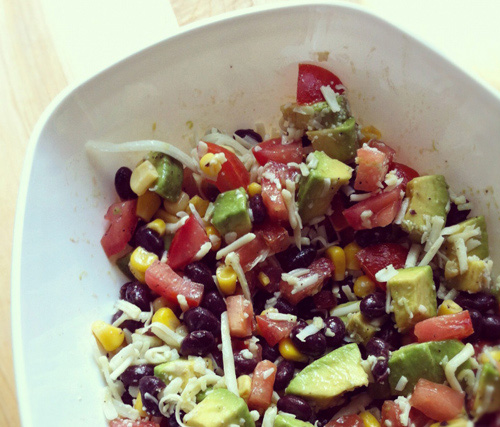 Yesterday was a busy day. After putting in some early morning time “at the office,” I headed… 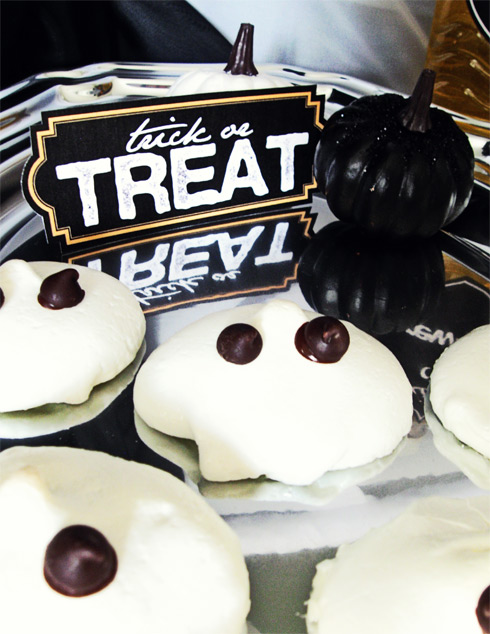 Wow, did this week fly by fast. I guess time flies when you are having fun, right?… 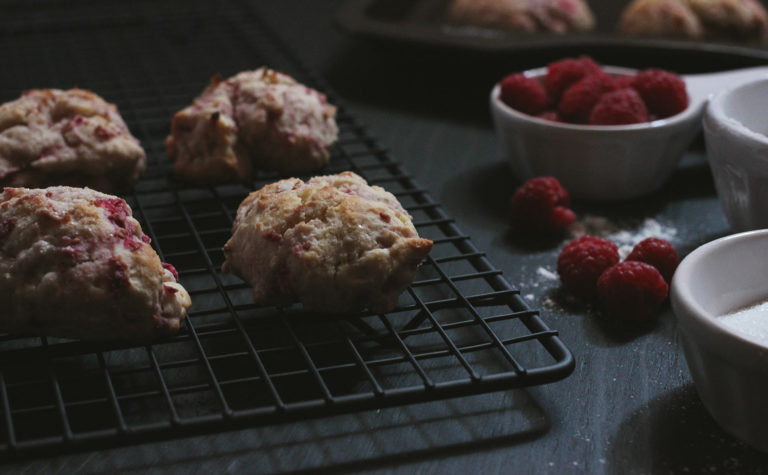 My excitement, appreciation, and maybe slight obsession with props is pretty obvious (just ask “J” about my… 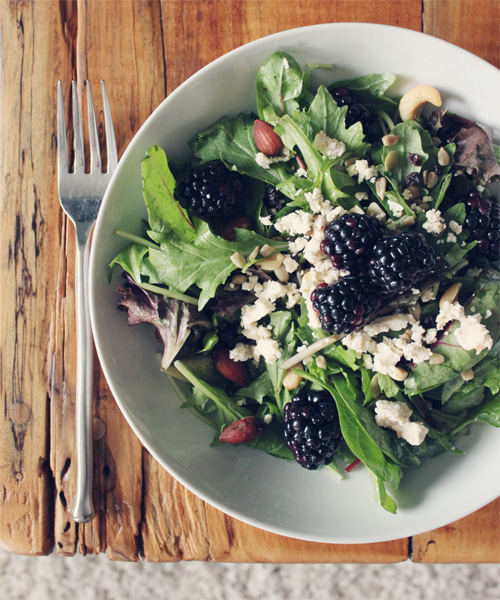 Fact: I eat a salad almost every day for lunch, and you know what… it’s not something… 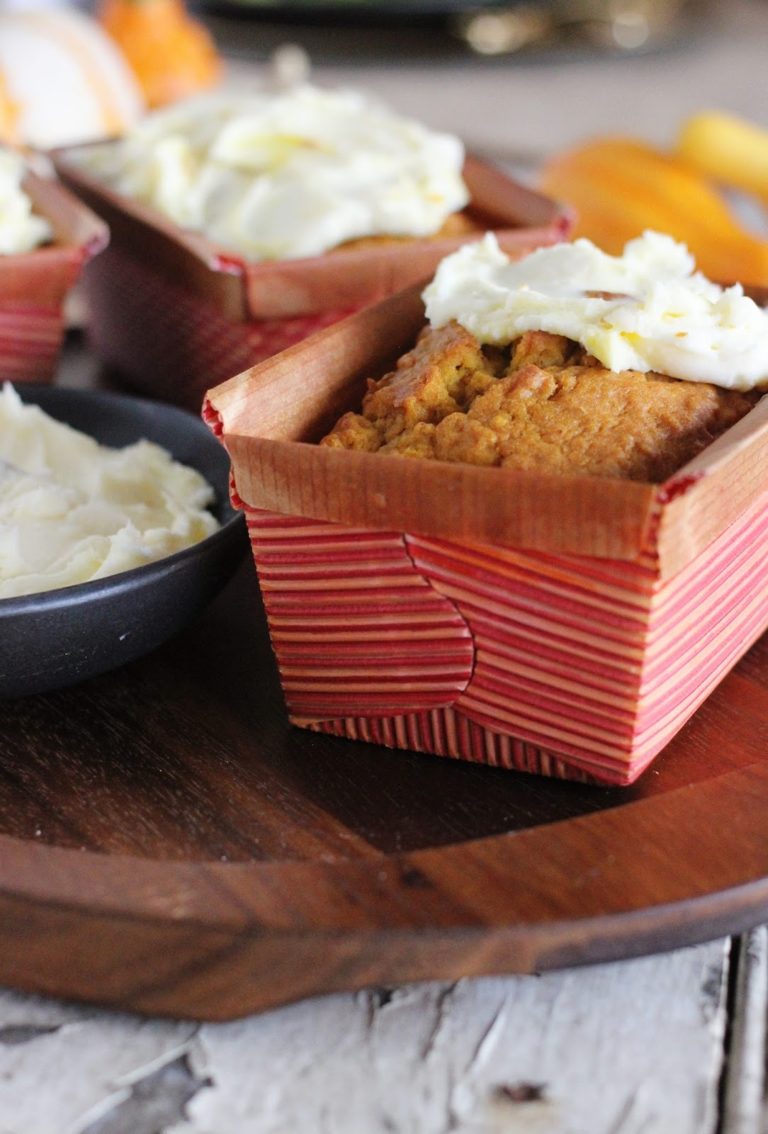 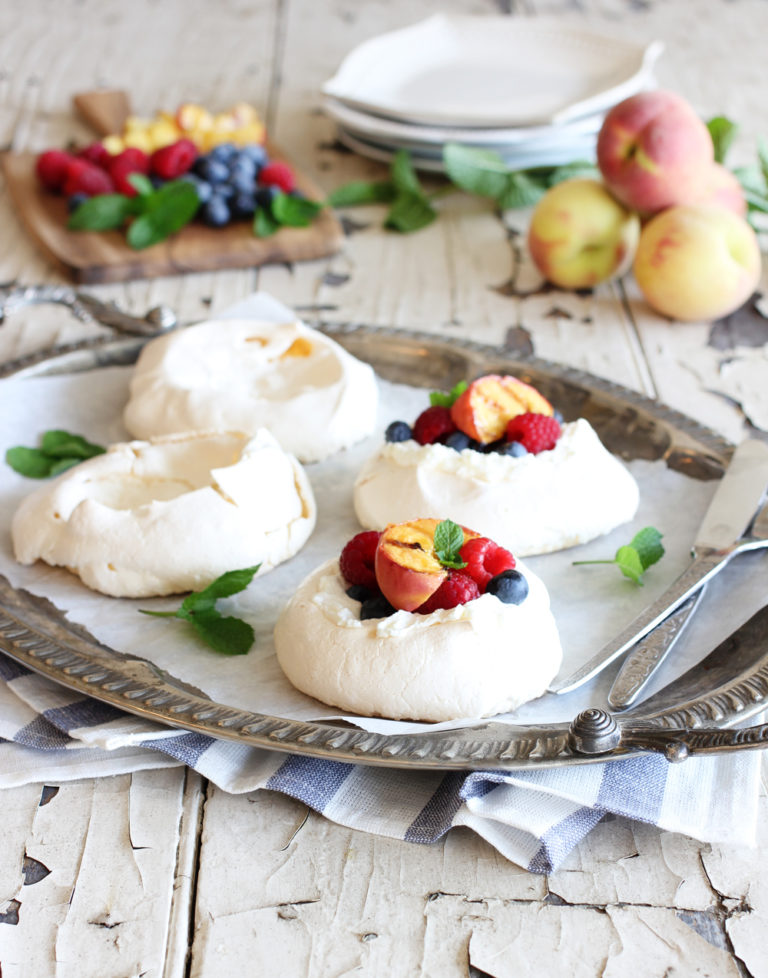 I am not usually picky about my food, but since we are in my honest space here,…